Michael Kaloki interviews Priscilla Kolibea Mante, who is investigating the therapeutic properties of Cryptolepis Saguinolenta, known as Ghanaian quinine. This article is republished with permission from SciDevNet.

In 2019 you were the only African recipient of the L’Oreal-UNESCO For Women in Science International Rising Talents Award. The same year you were also selected for the Organization for Women in Science for the Developing World early career fellowship programme. How did that all make you feel?

Actually, to date, 2019 has been the most exciting year for me not only personally, but also career-wise. It was a real honour to be selected for the L’Oreal-UNESCO For Women in Science award. I was introduced to all these incredible scientists and I met some pretty amazing people.

You research therapeutic properties of plants found in Ghana, to treat neurological conditions. One of these plants is Cryptolepis Saguinolenta, known as Ghanaian quinine. Tell us about your interest in this and other plants.

I’m a pharmacist so one of my strengths is in chemistry, in pharmaceutical chemistry. I have developed an interest in plants as therapeutics because, as we know, a lot of the medicines that we currently have, found their source from nature, which happens to be a very rich source for new therapeutics. We do not have too many highly effective medicines that can affect conditions of the brain. So, that’s why I’m very interested in developing new therapeutics.

Inclusion and Participation of Women in Global Science Organizations: A study reporting on the inclusion and participation of women in more than 120 science organizations that are coordinated at a global level finds that women are still under-represented. It calls for the establishment of a coalition on gender equality in global science to ensure a transformative action

You’re the chair of the Ghana Young Academy, which aims to nurture young scientists. You consider yourself a ‘champion’ of mentorship. Why do you feel mentorship is important among scientists?

When I started my career, I started to realize that there were a lot of things that I could have done if I had received the right guidance earlier. There are also a lot of things I would have done differently. Because of that I see myself as the person whose job it is to give younger people proper guidance. I like to open up people’s lives so that they can see what options they have in this world. The world is actually open and they are free to choose what they would like to do. They are free to try things. If it does not work out, they are free to start all over again.

You have said that you believe the biggest challenge for women in science is managing negative perceptions and overcoming gender stereotypes. Have you experienced this in your own career? What can be done to improve study and work environments for women in science?

As women, we often say that when a woman decides to have a career it is not always as easy as it would be for her male counterpart. We have been saying this to the extent that it is beginning to sound like a cliché. However, that is the truth of the matter. It is never easy for us women, especially when we grow up in very traditional societies. Right now, we are at the point where women have opportunities available to them. We can do almost anything that the man is allowed to do, but, that still does not absolve us of what is considered our traditional roles. Leaving the office at 8pm, I get home and I still have to cook a meal from scratch. I had to constantly explain why getting married first was not my plan and that getting my PhD first was actually my plan. I feel that a lot of the discrimination we suffer is born out of unconscious bias – most people don’t even realize that they are discriminating against us. 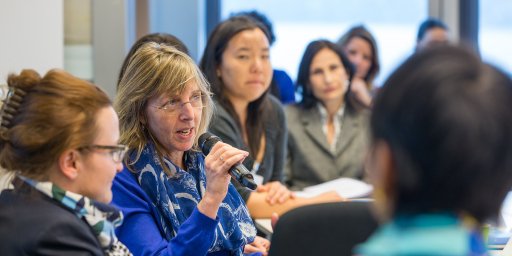